The Body and Full of Hell are both unique and influential forces in heavy music. Both artists welcome challenges and eschew self-promotion. Each artist seems driven to take risks and push boundaries of what is considered heavy. A clear example being that on recent tours The Body have performed without any live guitar or drums. Both artists enjoy the creative growth and music and good times that come out of collaborations. Each has collaborated often with other unique but like-minded musicians such as Thou, The Haxan Cloak, Krieg, Merzbow, The Bug and the list goes on. Despite their obvious differences in songwriting, The Body and Full of Hell are unified by their shared aesthetic, catharsis through the manipulation of emotions transformed by visceral noise and fueled by an inescapable sense of dread. They have returned to collaborate again not because of their commonalities but because of their differences and what those differences yield in performance. With Ascending a Mountain of Heavy Light, The Body & Full of Hell have integrated a love for electronic noisescapes with abrasive, precise sonic assaults into a sound unlike anything either has produced before.

Written and recorded in one week at Machines with Magnets in Providence, the music of Ascending draws from unexpected sources such as reggaetón and jungle (“Master’s Story”). There are some familiar guests to The Body fans, namely vocalist Chrissy Wolpert (Assembly of Light Choir) and Ben Eberle (Sandworm), as well as first-time collaborator drummer Brian Chippendale (Lightning Bolt, Black Pus), whom both bands share a strong aesthetic of individualism. Samples, synth, saxophone, and a drum orchestra all throb, and sputter, coagulating under the weight of the two bands. Programmed drum patterns and loops taking cues from hip hop are bent and twisted throughout, flawlessly emboldening the distortion drenched guitars and howling vocals. Each element, though meticulously crafted, is visceral, as the exhilaration of improvisation has not been curtailed by editing.

Ascending a Mountain of Heavy Light casts aside the dogmas of heavy music. Extremity in The Body & Full of Hell’s music is not based on macho musings or competitive trendiness, but rather is an integral tool to exploring the anxieties of modern life and the bridges between personal and political strife. As leading voices in DIY and underground music communities, The Body & Full of Hell, along with peers such as Thou, are expanding the possibilities of extreme music by shaping worlds of sound with a palette of diverse influences seldom seen in “heavy music” today. 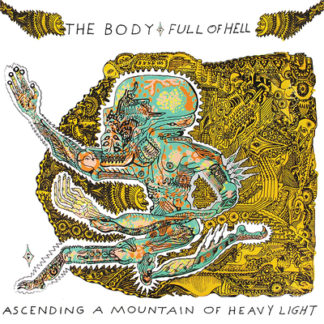